The Inflation of Zimbabwe

In 2008, Zimbabwe hit its peak inflation. 231 million percent was that peak. It got so bad that in 2009 the country had to suspend its own currency. There were many factors which led to this exceptionally historic inflation, but that’s not the point of this writing. What is the point is the value which can be obtained through acquisition of this suspended currency. 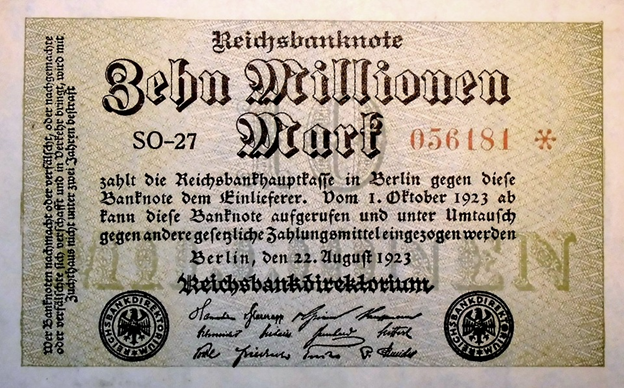 When inflation gets to such a high level as that, governments can either refrain from printing new denominations, forcing the people to fill wheelbarrows with notes just to buy basic living items, or they can introduce larger denominations to the market in order to avoid such a happenstance.

Zimbabwe did the latter, but as the economy continued to decline, they were forced to print larger and larger denominations until things got a little ludicrous. It actually got to the point where the largest denomination was a bill supposedly worth 100 trillion dollars in local currency. Given the high poverty rate, it’s staggering to consider these notes’ real value.

Because of the uniqueness of the situation which led to such hyperinflation throughout the country, the Zimbabwe trillion dollar bill has become so popular there are forgeries; according to BankNoteWorld.com, “Due to their popularity and demand, these notes are highly susceptible to forgery.” This means if you want to get one, you want to buy carefully.

You can usually find an authentic note, or series of them, for around $80. Here’s the interesting bit: popular bills that are out of circulation, but yet being falsely produced, represent a likely value increase over time. There were only a limited amount of 100 trillion dollar bills ever printed in Zimbabwe. As the years go by, these will get harder to find.

This means that if you buy one, or a series of them, it’s very likely they’ll be worth more than you paid for them in subsequent years. There’s a curve to this value increase that has a slight quotient of predictability about it, but it’s hard to pin it down directly. At the very least, should the curve not be terribly amenable, in several years they’ll still be worth your initial investment.

Zimbabwe currency isn’t the only kind that has a story behind it and a rarity silhouetting its production. Doing your research, there are quite a few valuable currencies out there which are no longer in production. It’s definitely possible to buy a number of these bills now, wait a few years, and find they are worth more even adjusted for “healthy” inflation.

With the internet today, even the novice can do a relatively minor amount of research and learn where to find some major purchases that increase their personal wealth. The more assets you have to devote to such investments, the higher your likely returns will be. If you haven’t looked into rare currencies, there’s an entire market just waiting to be explored.

Jun
2022 29 Is It Advisable For You To Invest In Pharma Mutual Funds?

Jun
2022 15 How to choose the best investment plan for your child?